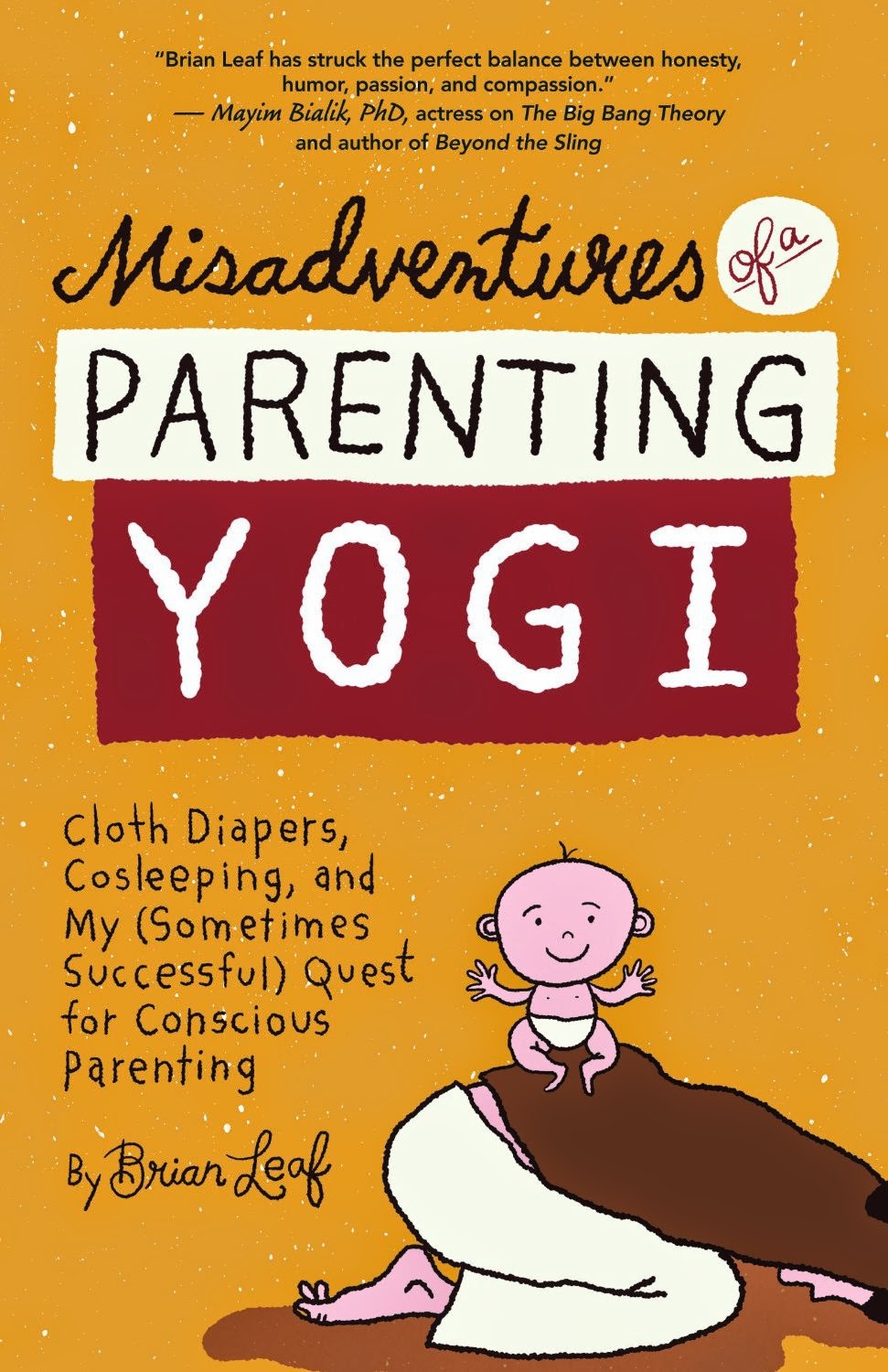 I recently discovered author Brian Leaf and I’m so glad I did. He is the voice of my generation of naturally-minded parents. He is caring, sensible, smart and funny. I’d like to think that if our paths had crossed, we would be friends.

Leaf is an accomplished writer with 12 books already to his credit, including two humorous biographies. He’s also a frequent Mothering.com blogger. I’ve just read his second biography, Misadventures of a Parenting Yogi (2014). It’s really, really good. That means a lot to me on a personal level. Now that I have three kids, I rarely get to sit down with a book. When I do, I have high hopes since this may be the only book I get to read for the next year—or decade—given that my youngest is still an infant. Thanks, Brian, for not letting me down!

With humor, honesty and insight, Brian Leaf shares his parenting journey, in the hope that ours might be improved as a consequence. Although not a parenting primer, per se, the book offers sensible strategies for dealing with many of the thorniest parenting challenges faced by neurotic Jews. Which isn’t to say that goyim reading this book won’t appreciate it, but my sense is that to really understand and love this book you might have to be Jewish. And from the East Coast. And upper middle class. And born in the early 1970s. And crunchy. And neurotic.

For example, Leaf takes on the issue of car seats. Sure we all know what a pain they are to install and uninstall, and how disgusting it is to clean rotting banana out of their cracks. But until reading Misadventures of a Parenting Yogi, I thought I was alone in my oppressive guilt believing that confining my babies to them would block their chi, cause lasting emotional damage, and necessitate many hours (and dollars) of craniosacral therapy.

I think I’ve spent more hours of my life over the past decade standing by the side of the road “bupping a baby,” or nursing a baby in the driver’s seat while pulled over, than I’ve spent sleeping. I just Googled “bupping a baby.” I can’t find it anywhere but it’s part of my vernacular. It means to bounce a baby on your shoulder while simultaneously patting it’s back and saying “Sha, sha, sha.” Who knows, maybe it has Yiddish roots?

Brian Leaf also brings his perceptivity and comedy to a range of other parenting topics, from birthing classes to breastfeeding, infant circumcision to managing discipline issues in older children. His research is thorough and his approach—to get in tune with your kid and to be present in the moment—is so sensible, and yet so easy to overlook in the chaos of modern parenting.

Leaf is very skilled at breaking down theories and making them comprehensible. No doubt this is why he’s been so successful as a writer of standardized test preparation books. In Misadventures of a Parenting Yogi, Leaf summarizes the best parenting approaches from gurus that include among others Dr. Spock (he was actually a righteous dude), William and Martha Sears, Larry Cohen, Alfie Kohn, and Adele Faber. Leaf proudly points out that the last three are “from the tribe” (Jewish).

Misadventures of a Parenting Yogi also reveals much about Brian Leaf as second-generation American Jew. Leaf has relinquished much of what has served for so long to connect and identify Jewish people. It started when his father changed the family name from Lifschutz (pronounced lif-shits) to Leaf (and one can certainly understand why). Leaf and his wife (who isn’t Jewish) were married by “an environmentally conscious half-Jewish yoga teacher.” Christmas and Hanukah have blended together in the Leaf household such that, one Christmas, their son Noah asks Santa for a giant dreidel. Leaf and his wife also rejected circumcision their boys.

While Brian Leaf could be a case-in-point from Alan Dershowitz’s book The Vanishing American Jew (1997) (and that, I think, is a bit sad) Leaf makes the point that the heart of Jewishness runs deep. He writes: “I don’t attend synagogue much these days. But, still, I consider myself Jewish. There’s no doubt about that. And it’s more than the latkes, potato kugel, and hamantaschen that I make for my boys. I am Jewish not strictly in a religious sense but in the deep appreciation and awe of love and family and children that my dad and mom and grandparents have instilled in me. It is this sense of Judaism that I most aspire to pass along to my own children.”

With regard to circumcision Leaf concludes: “Ironically, for me, the decision actually did come down to God. I trust her, and I don’t think she designed the human body with a throwaway foreskin, like an Old Navy tag we’re supposed to remove before wearing. I think the body is holy and magical and perfect as is.”

Such a strong stance against circumcision has earned Leaf the honor of being named Intact America’s Intactivist of the Month for June 2014—a fitting honor in time for Father’s Day for such a loving and thoughtful dad.