All Penises Welcome! Celebrating Brit Shalom Brings Its Message of Inclusion to Union for Reform Judaism

Being so involved in the circumcision issue, it’s easy for me to forget that many are still unaware of the anatomical facts, or even the controversies surrounding the practice. This was evident during my recent trip to the Union for Reform Judaism Biennial, held this year in Orlando, Florida. “Why would any parent want to opt out?” “Hasn’t it been proven healthier?” These were among the questions that Lisa Braver Moss and I encountered during the five-day event.

Thanks to the generous backing of three individuals—the first underwrote the $2000 cost of our booth; the second provided funds for set up and materials; and the third donated his skills as a graphic artist—we were able to have a booth in the exhibit hall during this important conference where we showcased our new book, Celebrating Brit Shalom.

At the booth, we engaged scores of rabbis and those with leadership roles in their congregations, as well as lay members of the Reform community. We sold several dozen books and gifted a number as well. More importantly, we engaged a very progressive and thoughtful group of Jewish people who were often eager to hear what we had to say.

Lisa and I talked about the growing number of Jewish families that are deciding to opt out of circumcision, emphasizing that many of them do want to participate in other aspects of Jewish life/observance—but that these families often have special concerns. For example, families who want to hold a bris-without-circumcision ceremony (brit shalom) are often reluctant to ask their rabbi, anticipating a judgmental response. How is such a family to know whether their rabbi/congregation will be positive or derisive?

Lisa pointed out that, through her own research, she’s discovered that many Reform rabbis say these families are welcome, and many rabbis are happy to do namings for intact boys. Just about everyone who stopped by the booth agreed that these families should be welcomed—but how? It’s not like a congregation is going to hang out a sign saying “All Penises Welcome!” (That’s Lisa’s line, by the way.) Nor are parents eager to announce their son’s circumcision status.

Lisa and I put together a flyer of ideas for congregations and leaders who want to actively welcome these families. We ran to the photocopier several times throughout the conference as the handout was flying off our table.

One young businessman-type with a leadership role in his New York congregation was very excited about including these families. When he realized that some families weren’t choosing to affiliate because of this he said: “Let’s send every family who is expecting a baby a postcard letting them know that non-circumcising families are welcome and that brit shalom is available!” What a fantastic idea and one that we had not thought of. He returned to our booth several times during the conference, the last time having spoken to his rabbi, who had told him he does officiate at the ceremonies and these families are definitely welcome.

We had so many fascinating discussions with passersby. Several grandmas stopped by to say they had intact grandsons. Often they approached in anger and frustration, only to leave our booth puffed up with pride after we explained that their grandsons are part of a new intact generation of Jewish boys that have been spared the pain and trauma of what is, in reality, a very damaging procedure.

I gave all the grandmas our bumper sticker: “Today’s Jewish Families are Celebrating Brit Shalom”—and all were happily accepted. 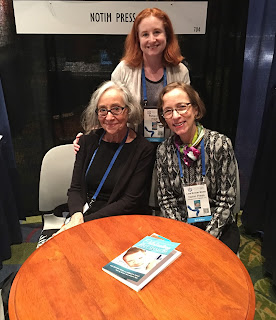 One of the conference presenters, the highly regarded feminist author Marcia Falk, stopped by our booth and we were so excited to see her. We had intuited that she might be supportive of our work. As we’d anticipated, she was very enthusiastic and Lisa and I began a lovely conversation with her, one that I’m sure we will continue.

I had a chance to speak to a great many Reform rabbis. Every time we saw someone with “Rabbi” on their conference badge we invited them over. Lisa’s beautiful miniature diorama of a brit shalom service served as a perfect icebreaker. A few didn’t want to hear from us—and couldn’t be engaged—but they were the exceptions. Most of those who stopped to chat supported our efforts. We even came across rabbis with intact sons!

One rabbi said she and her husband very reluctantly circumcised their boys because they didn’t want to jeopardize their careers. A cantor we met was thrilled to see us there, being very opposed to circumcision himself. A female rabbi from the West Coast, who described herself as being “very into attachment parenting,” said she circumcised her son as a “tribal marking, surrounded by a loving community,” knowing full well that it had no physical benefit.

A lovely rabbi from the Southern U.S. was astounded to learn from us that the Reform movement does not have an official statement in favor of naming intact boys. She whipped out her cell phone and searched the Central Conference of American Rabbis responsa right at our booth. “This is outrageous! Something needs to be done about this!” She said as she hustled off to speak to someone about correcting this void.

A rabbi in upstate New York insisted that every family in his congregation has a brit milah, so there is no need for our book. At first I was truly scratching my head, surprised by his statement. Once he’d walked on and I had a chance to reflect, I realized that couldn’t be accurate. About 70 percent of Reform families who circumcise do so in the hospital. A percentage of those have a baby naming later. I wonder if any of those “namings” were really brit shalom ceremonies under the radar, because the parents were too intimidated to say? I know if I was a member of that rabbi’s congregation I’d be reluctant to bring it up!

More than a few rabbis said they preferred that parents not talk about their choice to opt out. “So you’d prefer to have sort of a don’t ask/don’t tell policy?” Lisa inquired. He answered in the affirmative.

Conversations sometimes turned emotional. One man came up and said he was “against” what we were doing. We spoke with him at length. He grew up in a post-Holocaust communist country, where no other children were circumcised and he felt a deep sense of shame. Today he is proud to be circumcised.

Another woman approached us saying, “You’re not going to like what I have to say.” She then talked about how in favor of circumcision she is. Once again, we spoke to her for awhile. Eventually she shared that her son had a botched bris. She left our booth still very committed to her stance.

One mother said she circumcised her son (now in his twenties) because she was afraid he’d be singled out as different, but that now, as an adult, he very much enjoys going against the grain, and he is very into nature. She said she suspects he’d rather be intact.
There were a number of high school students at the conference but unfortunately many did not make it into the exhibit hall. Whenever we saw young people we engaged them, and on those instances they were very receptive. One evening, when I was away from the booth, Lisa spoke to a young woman who told her there is a hip Jewish community in Brooklyn, New York that is eschewing circumcision. I’d certainly like to get in touch with some of those families! If any of them happen to be reading this, please reach out to me directly via email.

Lisa and I weren’t there to debate the pros and cons of circumcision, figuring there is sufficient information online. However, in retrospect, we both feel our booth might have benefitted from more discussion, and possibly a handout, about the function of the foreskin and the lifelong problems that result from its obliteration. (

It’s probably no coincidence that the United States and Israel are the largest consumers of the drug Viagra.) My sense is that most Jewish people think foreskin removal is just token snip—harmless and even beneficial. More education is needed about how the procedure changed in Hellenic times to be much more radical. Prior to this change, just the overhanging skin was removed, whereas now an entire one-third of the skin of the penis is taken during milah.

One of the first people we spoke with had just served as a sandak during his grandson’s bris and he was astounded by how much skin was removed from the penile shaft.
I don’t know whether Lisa and I will have future opportunities like this one (I tend to think not) as this was a very special circumstance made possible by our “Elijah backers.” Elijah was known as an angel who came to Earth; a protector of children. Thank you to our Elijahs for making this possible. It’s impossible to know at this point—if ever—what will be the impact of our presence at URJ 2015, but I suspect the ripple effect will be significant.