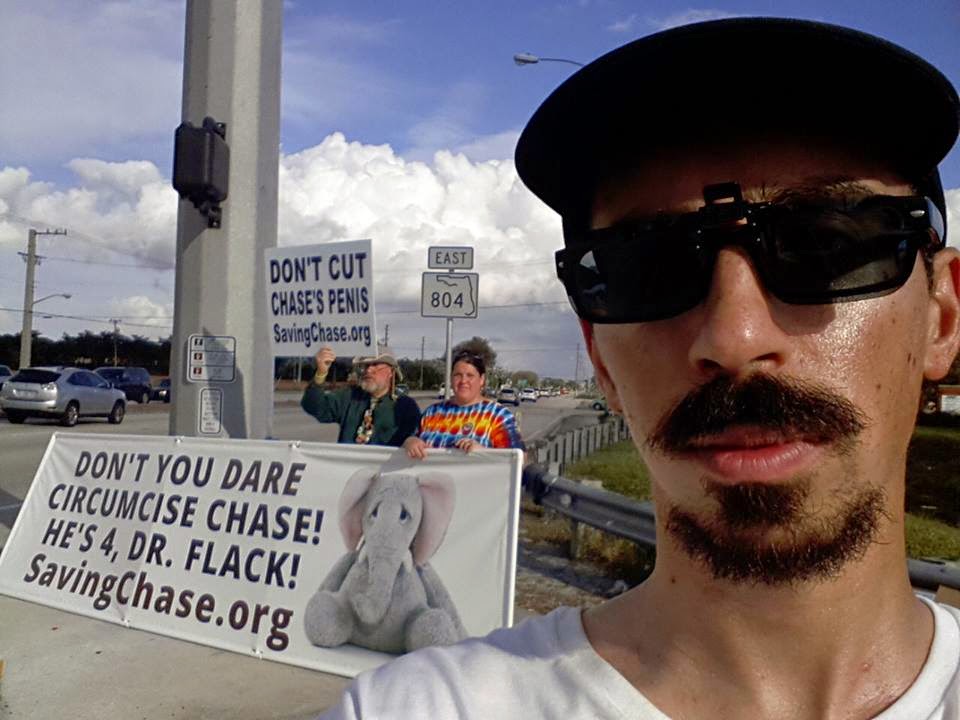 Jonathan Friedman is the last person some might expect to be lead activist in a high-profile circumcision case. After all, the Brooklyn-born yeshiva graduate was raised to believe in the centrality of circumcision.
But Friedman defies many conventions as he travels the U.S. organizing protests and otherwise rallying the Intactivist troops. Despite graduating from The Cooper Union with a degree in engineering, he doesn’t have a steady job in the “real world”—it wouldn’t give him any time to “Intactivate”—and he enjoys a lifestyle on the road, staying with other circumcision critics who eagerly open their homes to him.

Friedman now applies his engineering skills to building and managing websites, like SavingChase.Org. He says his drafting skills are particularly useful for designing eye-catching graphics for banners and signs, which he builds himself using PVC pipe.

For the past several weeks Friedman has been in South Florida, focusing his attention on the case of little boy Chase, a four-year-old caught in the center of a parenting dispute. The boy’s father wants him circumcised but his mother doesn’t. She’s afraid he’ll be traumatized by the procedure. A family court judge sided with the father, although there is no medical need for the circumcision and the mother has shared custodial rights.

Friedman and others have been staging peaceful street protests near the office of a doctor who had been called upon to perform the circumcision. The protests continue today and tomorrow at Bethesda Health City, by the intersection of W. Palm Beach Blvd. and Hagen Ranch Rd. in Boynton Beach, Florida, from 11AM to 6PM each day, rain or shine.

“Any surgery is traumatic for children, has risks, and should only be done to address a medical problem,” says Friedman. “We’re calling upon this doctor and others in the area to refuse the father’s demand for this unnecessary surgery which will be painful and emotionally traumatic for the boy,” he says.