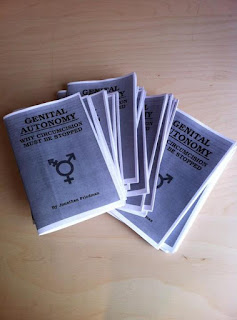 Social activist and New Yorker Jonathan Friedman has recently published a “zine” on male infant circumcision titled “Genital Autonomy: Why Circumcision Must Be Stopped.” This is a significant project because it is introducing a wide audience to the harms of circumcision in an innovative way—and also in a way that is, at the same time, steeped in historical tradition. In the following interview, Jonathan talks about his project and how those interested in preventing infant circumcision can get involved.
Beyond the Bris:
What exactly is a “zine” for those who may be unfamiliar with the term?
Jonathan:
A zine is a pamphlet. Perhaps the most famous example is Thomas Paine’s “Common Sense.” Zines are made to be mass-produced, which is really easy with photocopiers. The word “zine” is short for magazine, and is pronounced “ZEEN.”

Beyond the Bris:
Have zines been used as part of other human rights campaigns or political movements?
Jonathan:
Certainly. Zines are popular in activist and counterculture scenes. I like to read social criticism and forgotten history zines. I have a collection of over 100 zines in my bookshelf. I’ve seen zines on housing, education, environment, food, economics and war. One of the most famous zines is “On the Povery of Student Life,” a 1969 pamphlet from Paris that set off student and worker strikes that shut down the entire country. Here in New York City, Occupy Wall Street has printed out zines for major actions against Goldman Sachs and the American Legislative Exchange Counsel (ALEC).
Beyond the Bris:
What inspired you to write this zine?
Jonathan:
I’ve always wanted to distribute free literature. Once Occupy Wall Street began, I networked with people at the free literature table in Zuccotti Park. We distributed tens of thousands of zines, all for free. The zines were on various topics. We had articles by Emma Goldman, Noam Chomsky, Howard Zinn and David Graeber. We had zines on bicycle maintenance and COINTELPRO (an acronym for Counter Intelligence Program). We had a lot of zines, and people came back often to pick up new ones, especially because they were free. Although we never asked for donations, people donated a lot of funds. We were able to cover the copying costs.
People always asked if I had written any of the zines on the table. So, one day I decided to write a zine on circumcision. I had been writing many articles on IntactNews, but I felt I needed to try something different, something that would contain everything I’ve done over the past year, something more basic and educational.
Beyond the Bris:
Why do you think a circumcision zine is so important?
Jonathan:
In contrast with zines on other human rights and political issues, a zine on circumcision can be measurably successful in creating a better world. All that is needed to stop circumcision is to educate individuals, which is much easier to do than stopping complex economic or environmental crises.
Beyond the Bris:
So how has the project been going so far?
Jonathan:
Right now it’s been one week since the first printing and I’ve already distributed over 100 copies of my zine. My zine has been making the rounds in activist circles. I find these people are more receptive to the idea of genital autonomy since their work involves challenging authority figures and experts, and also the general principle of autonomy/anti-oppression. Just the other day a woman came up to the free literature table at Occupy Union Square. She picked up the zine and expressed regret for circumcising her son nine years ago, saying it was the worst thing she had done in her life. A war tax resister that I work with has two intact sons. He read the zine and is really excited about it. The word is spreading and people are getting educated.
Beyond the Bris:
How are you marketing the zine?
Jonathan:
I’m marketing the zine mostly through tabling and online. I also carry a stack with me at all times to hand out to people. I also have copies on the free shelf at Bluestockings, a radical feminist bookstore in New York City that I have been going to events at for years.
Beyond the Bris: If people reading this interview want to help distribute the zine, what can they do?
Jonathan:
People can announce the zine on Facebook by linking to the site QuestionCircumcision.org, where it is available for free download in regular and booklet form. Those wishing to print and distribute it in their area are welcome and encouraged to do so. If people want to donate, this will enable more zines to be printed and distributed in New York City, which is one of the highest-need places for education on genital autonomy. Donations can be made via Paypal directly on the QuestionCircumcison.org site. If people have any questions about the zine, or about making and printing zines in general, they can email me at info@intactnews.org.
___________________________________________
If you are reading this and opposed to infant circumcision, Beyond the Bris asks that you please support Jonathan’s important project right now with your donation of $18 or in multiples of 18. Typically when Jews give gifts of money they will give in multiples of “chai,” which is the number 18. Chai means life in Hebrew but in this case it means luck. Good luck, Jonathan!