My wife, Amari, was seven months pregnant and we were at our midwife appointment. At this point we knew we would be having a boy. Near the end of our visit, the midwife asked us what we were planning to do about circumcision.

Amari and I are both Jewish and we had discussed it a couple of times before. My take was: “We’re Jewish. My grandparents are Holocaust survivors. Our boy is getting circumcised.” However, Amari was against the procedure, although she was willing to do it if it meant that much to me.


I had never attended a bris. The thought of cutting off a baby’s foreskin made me queasy. That’s when it hit me: How in the world was I going to witness my own son going through it? I put that thought aside, figuring I’d deal with it when it happened.

That brings us back to our midwife appointment. My answer to the midwife was, “We’re Jewish so we need to have a bris. I have no idea how I’ll be in the same room, the thought disgusts me however….” That’s when the midwife said something that changed everything. She said, “You know, there are alternatives. There are ways to honor your religion without cutting off your son’s foreskin.” REALLY!?

The midwife also gave me a book by a rabbi about circumcision. I took it home and read it cover to cover. I came away resolved that there was no way I could do this to my child. This lead me on a search for a rabbi who would perform a bris without circumcision.

I spoke to a rabbi from a Reform synagogue and told him about my feelings of wanting to have a ceremony without circumcision. He had a glib response that didn’t take into consideration how serious this issue was for me. He said, “So you just want to have bagel, cream cheese and lox?” He then proceeded to tell me, at length, about how I’d come to regret the decision not to circumcise.

Just as I was feeling defeated, I found a website that lists over 100 rabbis who perform brit shalom, an alternative to brit milah. (Brit shalom contains the symbolic elements of the covenant ceremony, but without circumcision.) At the time, there was only one rabbi listed for all of British Columbia… but he just so happened to be in my city, Vancouver! I later discovered his name had been added about three weeks before I’d found it. I believe this was the universe rewarding us for following our hearts.

I connected with Rabbi David Mivasair in such a deep, meaningful way. I grew up going to Jewish school, attending synagogue–and yet I had never met a rabbi whose words inspired me the way his did. If I wasn’t convinced before that we had made the right decision, I was now.

After meeting with the rabbi three or four times, it came time for the ceremony. On the eighth day of my son Kai’s life, we had a ceremony across the street from our house, right by the Pacific ocean. We had our good friend playing guitar while we all sang in Hebrew. Rabbi Mivasair explained to everyone the meaning behind what we were doing in an eloquent and meaningful way. 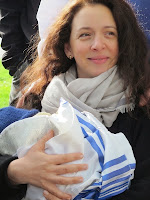 Instead of circumcising our son, Amari and I decided that each member of our immediate family would bless a part of Kai with olive oil. I blessed his bicep and explained it was so he would have the strength to stay true to his beliefs, to who he was. My wife blessed his heart, wishing him to be full of love for everything and everyone. Each member of our family had an opportunity.

The service concluded with the whole group gathering behind us. Kai was in the front, Amari and I behind him touching his shoulders, and everyone behind us touching the person’s shoulders in front of them. We said a blessing, with the group energy passing and growing from hands to shoulders all the way to Kai.

Kai is now five months old and Amari and I couldn’t be happier with our decision. We encourage everyone to do their research and follow their hearts. You can never go wrong doing that.

Shawn Stark grew up in a Jewish community in a suburb of Montreal, Canada, where he attended Jewish elementary school. He later moved to Vancouver. He met his wife, Amari, at a wedding in Montreal and she moved from London to Vancouver seven months later. They currently live in Vancouver, living on the beach and loving life.