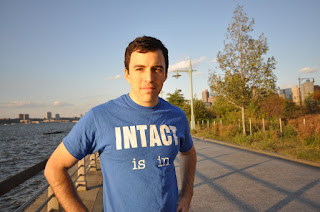 REBECCA: Is there something about barefoot (natural) running that corresponds to your feelings about circumcision?

REBECCA: What do you do for fun?
I’m really into photography and now video production, although recently it’s mostly been in support of the Barefoot Intactivist project. I also like tennis, playing guitar, and I’m a big fan of Real Madrid in soccer and the Boston Celtics. I like reading all kinds of books.