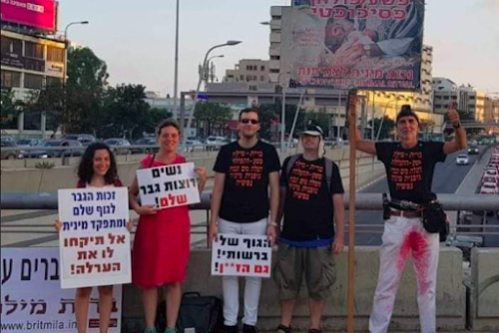 Danish parliament is scheduled to vote on a bill that would prohibit parents from circumcising boys. It’s already illegal in Denmark to cut the genitals of minor girls for religious reasons. The goal of the bill is humanitarian in nature, designed to protect both boys and girls from the pain and harm of unnecessary genital cutting.

The measure is unlikely to become law. Danish Prime Minister Mette Frederiksen has expressed firm opposition to the proposal, saying she does not want to drive Jews out of the country. Denmark has a long history of being friendly to Jewish people.
Most Jews and Muslims are aligned against the proposal, but a small group of Israelis support it. Today they held signs outside of the Denmark embassy in Tel Aviv, “so they’ll know that Israelis support them too,” reads a Facebook event posted by the Israeli Hebrew group “Against Circumcision.”
Beyond the Bris checked in with some Israelis in this group to assess the current vibe as far as the shift away from bris in Israel.
“No doubt there is a wind of change in the air. Many of my acquaintances [in Israel] are not having their sons circumcised. This was almost unheard of even ten years ago,” says Gideon Gourell. “Venture out of the few secular/liberal strongholds in Israel, and pretty much everybody commits the crime,” he says.
Sarah Nahum, who lives in Tel Aviv, agrees there’s been a change over the past decade. She says when her son was born about ten years ago she didn’t know many people who opted out of the brit, but over the years she has met an increasing number of families with intact sons. Ms. Nahum is part of the home schooling community and says her observations are “not necessarily representative of the a larger trend.”
Gur Yehuda, another member of the group, says he feels more people are starting to not automatically pursue circumcision and are trying to educate themselves about the many involved issues.
May Oberman says, “Israelis get more and more educated with time and the circumcision rates drop. I personally speak against circumcision only with non-religious people because the religious ones care a lot about the religious and traditional aspect of circumcision.”

However, Alex Aronsky is less optimistic about Israelis opting out of the rite. “I am a member of the new Israeli libertarian movement for nearly a decade now and even within our ranks a lot of people still do not understand why male genital mutilation is a human rights violation and will defend it to the point of ad hominem screeching,” he says.

Israelis typically have the bris done in a synagogue, although it’s common for secular Jews to have the bris at home with a doctor who is also a mohel. Those who don’t circumcise, typically don’t have an alternative ceremony.
“I’m not sure an alternative ceremony is an appropriate solution in Israel. Here Jewish religion is either Orthodox or heresy. It’s easier not to circumcise than to sell your relatives on a new religious ceremony,” says Or Olansky.
But Eran Elhaik thinks alternative bris for boys could catch on. “There is a ceremony for girls where obviously nothing is being cut, so the transition from male-like ceremony to a female-like ceremony is feasible but there is a lot of work before the mental gap can be bridged. Covid may provide the opportunity to promote the alternative ceremony,” he says.